This week the children are focusing on Deema Duck, who ‘never gives up!’
Here is her story…
One sunny morning, Deema the duck was happily swimming along the river where she lived. The river was flowing very fast and her legs had to paddle very quickly under the water so she didn’t get washed down the river! That morning, some children went with their teacher down to the river to throw some bread to feed the ducks. All the other ducks were swimming nearer to the edge than Deema, and quickly gobbled up most of the bread before swimming away. Deema could see the children throwing bread but the river was too fast for her to swim over. She tried to swim over three times,
but each time she nearly got washed underneath the water! After that, she saw a rock nearby. She used all her energy to swim to the rock, then jumped over the fast flowing water to where the children were, and because they had seen how Deema hadn’t given up they threw her some extra
bread! 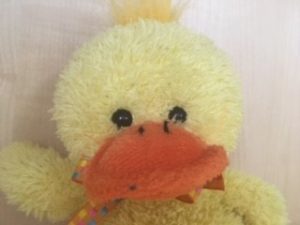